Where did Men's Sheds come from?


This movement began in Australia when men realised they could come together around practical tasks on a regular basis, particularly if they had a designated place or workshop where tools and work in progress could be stored. This appeals to men both living alone or with partners and at all ages although the vast majority of 'shedders' are at or beyond retirement date.

In England the first shed was created by Age Concern Cheshire at Hartford in 2009. There are now over 470 Sheds in the UK, with more always being planned. They vary from full-time projects with paid staff and occupying industrial premises to groups meeting in village halls and community centres for only a few hours a week. Some Sheds are in deeply rural locations, most are in small towns but strangely considering their populations, there are relatively few in large cities.

Our Shed has grown in just three years to over 50 members, The problem that we now face, like so many other Sheds, is that we have outgrown our current corner in the Theatre. However plans are afoot for the Theatre to expand it's floor area and build a new theatre to complement the current Oak and Acorn theatres thereby allowing us slightly more space. It is more than likely with our rate of growth that even that will be inadequate. If anybody knows of an unused plot of land big enough for a good sized shed or an outhouse or barn that is currently not being used we could be very interested please let us know, we would be most grateful for such a lead.

When we started it was under the auspices of what was then known as Community Action Fareham. Without them it is unlikely that our particular Shed would have got off of the ground in anything like the way that it did, or whether it would have started at all. For the first two years we operated under their auspices, using their insurance cover and their expertise in organisation. In fact, I believe that it was CAF that found our slot in Titchfield Festival Theatre.

That was probably the most vital step in progressing the Shed. We now have an excellent symbiotic relationship with the management of the theatre. We get premises at a very good rent and the Theatre gets help with scenery, maintenance and the like.

Last year we applied for and got our own charity status which allowed us to arrange our own insurance and the like and made us completely independent of any outside influence. 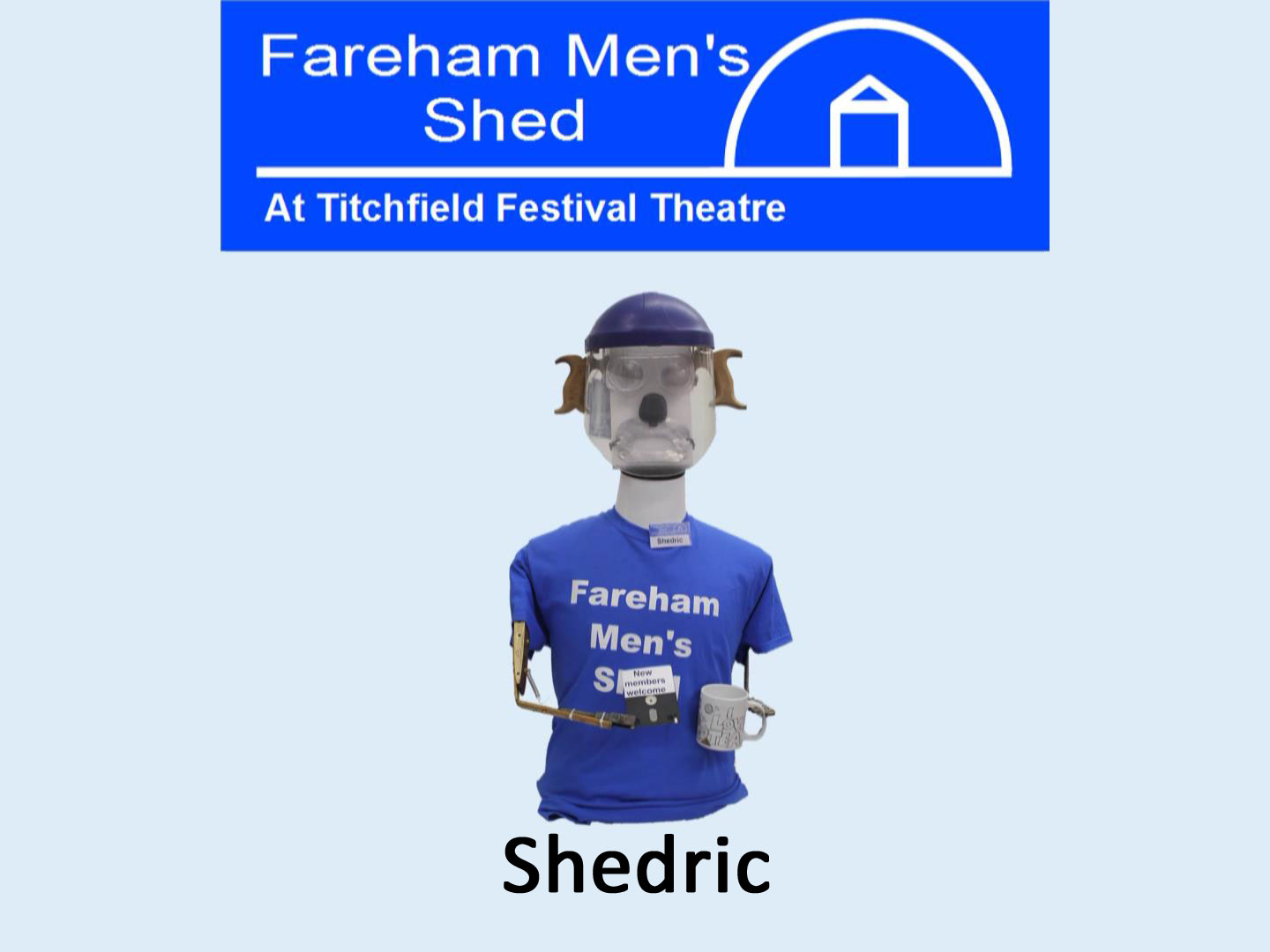 A copy of our current promotional video is available here on You Tube.
The latest one was uploaded on 07-07-2019

John joined Fareham Men's Shed in 2017 and was always keen to join in and support activities and events. He was an unassuming “true gentleman” always positive, cheerful and helpful.

Occasionally John would be seen sitting quietly in our recreational area at a table with a cup of tea and a few photographs. If you enquired what the photographs were of, his eyes would light up and his smile almost stretched from ear to ear. Then with great pride he would explain what a member of his family had achieved and by the end of the conversation you would share that joy with him.

There are two projects that we will always remember John for. The first being that the Shed had acquired two very old brass blow lamps. John spent many, many hours cleaning them and making them sparkle, finally mounting them on wood as a pair of book ends!

The second project was mainly done at home, we were kept in the dark and he would occasionally arrive at the shed and get one of the members to machine holes in some thick Perspex using the new lathe, not letting on what it was going to be. Then one day John turned up with a masterpiece, a desk tidy made from empty Guinness cans. He claimed that it took several cans to get it right but we were convinced it was just an excuse to drink more of the nectar!

John will be sorely missed by us all and our thoughts are with his family at this sad time.